Pokémon Go game has been played all over the world by not only children but also youngsters. People are going crazy over catching pokémon by travelling from place to place. Now the developers of this game has announced some exciting news for the game lovers as this game will be available on Apple’s smart watches. Arrival of this game on the watch will give a whole new dimension to the game as well as will make the game more enjoyable. It was very difficult to stuck your faces on cell phones while catching the pokémon. Transferring the game into wrist watch will be much more easier and convenient for the people who love to play this game.

Pokémon Go app in Apple’s smart watch will allow the users to perform several trivial functions without pulling out their smartphones from their pockets. This app will also allow the gamer to find out nearby pokémon, will count the total steps that they have taken in both workout log also steps required to hatch the eggs. Users can also collect items from pokéstops simply by using smart watch. Basically this app will notify the users about all the happening regarding to the game. 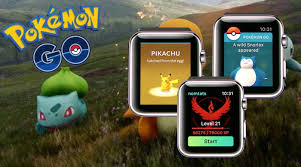 This app surely provides a fitness opportunity for those who want to do some workout. Go hunt down your pokémon by maintaining fitness goals but that does not mean that users will not have to use their cell phones in order to play this game because to catch the pokémon and different creatures from this game users still have to take out their smartphones in order to perform the usual drill linked with the process. There are also some other  problems in the smart watch like it has lack of a proper camera, and other hardware issues. People who want to play this game with Apple’s smart watch will only be able to collect items and to find pokémon and for catching it they will have to use their cellphones.

Read more: 5G: Faster Than Fastest Advance Technology Is On Its Way To Reach You