Vine app is going to be transformed as Vine Camera

Vine app was developed back in October 2012 to make short video clips of 5-6 seconds long. The purpose of this app was to provide the people with the facility of capturing beautiful moments of their lives and to share them with their dearest friends.

But soon it became pretty obvious that these vines are more about something creative as this vine culture shifted towards more creativity. This app was acquired by Twitter in 2012. Now the developers of this app has announced that this Vine app is going to be transformed into Vine Camera in January 2017.

Talking about Twitter, they announced to cut the support for this app in October 2016 as it is too expensive and costly that they  cannot keep this app running because of the popularity of Snap chat and Instagram. According to Vine blog, the developers are working on to converting this application into camera. Means that users will be able to save videos of six seconds on their mobile phones or they can directly share them on Twitter with that the capability of sharing directly on Vine platform will be removed.

Pro Tip: How to Get Verified on Twitter (Step-by-Step)

You can download your vines through website vine.co your vines will be live on Vine.co you can easily browse your videos that you have previously created and from application also. Adding more features to it now vine will also be incorporating the option to follow on Twitter. People who are following you on vine will also get the notification to follow you on Twitter as well. 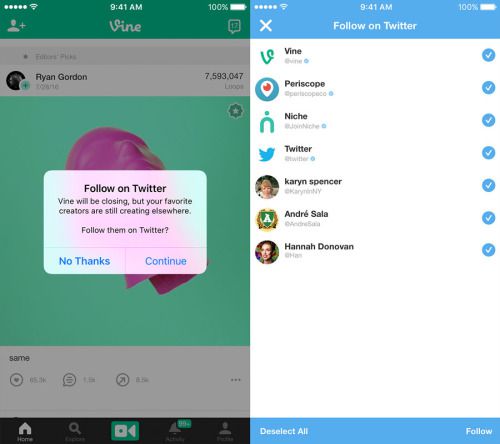 More to it, When the app will be converted into standalone camera users will not be able to download their videos from the app so it would be good if users start to save their videos before January 2017. There is also an option to receive emails that incorporates links to your vines if you cannot download every video at once. In January, the website will be switched over to archive mode.

While Twitter has not mentioned that for how long your videos will be available there so it is advised that for the safe side users should start to take actions to save their videos before their favorite moments vanish. Vine Camera is hoping to be pretty amazing surely as much as Vine app was.